I've got this big plastic spider which I liberated from our Sunday School commander-in-chief. Well, she said some kid must have left it at church and forgotten about it, so I claimed it. Unfortunately, at that time, I shared 'office' space with a lady who got the shivers looking at it, so it was not welcome. Our receptionist/secretary/do-everything-lady gave him a home on top of her monitor. A couple of months ago she moved to a new job and the new r/s/d is terrified of spiders. Homeless again. I thought to put it in our minister's office. But no, what if he is counselling and the spider causes more trauma? It stayed in my car for a while, until my youngest child reminded me, somewhat gleefully, that one of my other children is terrified of spiders. The new lady who shares my 'office' space in the cry room is ok with spiders. So I thought to put him up on the pelmet above the window where he wouldn't get mixed up with the baby toys. The first Sunday after that I was talking to someone who pointed the spider out to me, with some mock horror. So, he has retreated into my laptop bag, where he is pretty much forgotten. I guess I sometimes feel like the spider. And I suppose I sometimes treat others like that too. I want to make sure I don't marginalise people - especially those who don't have the benefit of organisations and media coverage. Those silent people who are different, probably hurting, and easy to forget. Only in God's strength.

Posted by Jenny Hillebrand at 07:52 No comments: Links to this post 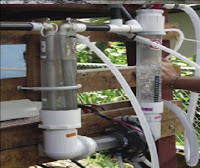 One of the blogs I read is 'Real Live Preacher' by Gordon Atkinson. He has been doing training in mission outreach where they are taught to install water purification systems. You can read his experience here. I was curious about these systems because there is obviously big potential for their use in Africa. The mission organisation is Edge Outreach and I trekked along to their web page. If you dig around you can find some of the stories they tell. One is about a tribal king in one area who refused to allow the mission team to install a system. This organisation is very conscious of the need for the locals to buy in and are not into forcing anything on anybody. But they asked this king why he would not allow it - given that so many small children die from diahroea every year. The king's reply was that babies have always died and the people will not be angry with him for that. However, if there is not enough food, the people will be angry with him. The implication being that if the babies lived he would have a problem. Our western outlook is horrified about this approach, but it does raise real ethical issues.

One's thoughts can go in so many directions after hearing this story. But what worries me most is my feeling of paralysis. If solving one problem simply causes other problems, what can we do? Maybe we should not install purification systems . . . Loving our neighbour is not really that simple!

Posted by Jenny Hillebrand at 11:33 6 comments: Links to this post

I read an interesting online article from Christianity Today. It's by Brian McLaren, but although that cries out 'emerging stuff', it's something that's relevant to all churches. He talks about the glamour associated with high-tech church. Like multiple venues using video technology, tv broadcasts and any form of communication that does not rely on the actual presence of the preacher. And he mentions the lack of glamour associated with pastoral caring. The one-on-one loving of people. Gifted preachers and communicators gain high profiles, but gifted pastors are pretty invisible to the world at large. And yet we have to ask ourselves which Jesus would have been.
There is so much pressure in the world to be great, famous, better than the next person. Like Rob Bell says in 'Velvet Elvis' - superpastor. There can be no question though, that Jesus' call to us is to love one another. And that is a personal thing. There is a place for 'virtual reality' as we stay contextually relevant, but the challenge is to maintain an awareness of the real reality which is loving real flesh and blood people.
Posted by Jenny Hillebrand at 08:55 4 comments: Links to this post

I had the opportunity last Sunday to take the 10am church service at Central Methodist in Joburg. The event was Local Preachers' Sunday, the first Sunday in October. Some churches participate in this and preachers get to see churches and circuits other than their own. I was really looking forward to preaching in a church that has a long Methodist history and I did enjoy the experience. Apparently the congregation was about 500 strong - I am useless at estimating numbers like that, so I'll have to take the word of those who know! That is the biggest I have ever preached to. There were also four ministers there - the most I have ever preached to as well! But I must admit I wasn't really conscious of the number of people. I think my dominant desire is to communicate and that feels the same wherever. And having preached in five different settings on the last three Sundays I am just so aware that it is God who communicates and Jesus who is the power. And he is so good to have given me the last three Sundays and the renewed conviction that I am called to preach, even if I don't get it right all the time.
The picture is apparently of refugees sleeping in the foyer at Central. I didn't see crowds of people there, but I did hear about them.
Posted by Jenny Hillebrand at 11:23 5 comments: Links to this post

I've been thinking about something that Becky blogged a while back. She quoted from Watchman Nee's writing on the Good Samaritan, which I've copied here:

The lawyer asked who his neighbor was, and the Lord Jesus responded by asking who was the neighbor of the man who fell into the hands of the robbers. In other words, the lawyer was the one who had fallen into the hands of the robbers. The One who showed mercy to him was his neighbor. The neighbor does not refer to any man; it refers to the Savior. The Lord showed the lawyer that the neighbor is the Lord Himself. He said, "Go and do likewise." This means that the lawyer should do his best to love that Samaritan. Many people have turned this parable around. They think that the Lord wants them to be the Samaritan. They do not realize that they cannot go to the cross to forgive sins, and they cannot be lifted up to bring down the Holy Spirit. Only He has the wine and the oil. Only He has the beast, the inn, and the denarii. We are not the Samaritan. It would be totally wrong to ask the man who fell into the hands of the robbers to be the Samaritan. The neighbor whom the Lord referred to was the Samaritan. This means that the Lord came to be our Neighbor; He came to save us, to provide us with the beast, the wine, which signifies the life, the inn, which signifies the church, and the denarii, which signify the gifts and grace. These things He gives until He returns. When the Lord tells us to love the Samaritan, He is telling us to love Him.

This parable has always bothered me, because it is not clear who Jesus is asking us to be in the parable. It is nearly always interpreted to mean that we have to be the Samaritan. I read this interpretation from Watchman Nee and I almost need it to be right. God has the wine, the oil, the beast, the inn and the denarii. We cannot be God. We don't need to be God. He is the provider of riches, of relief, of salvation. Yes Lord, you be God. But please let me help where I can. Give me work to do for your kingdom. And let me be content to do the work you give me.

Posted by Jenny Hillebrand at 11:43 5 comments: Links to this post

I went last week to fetch my candidates forms from the superintendent's office (although I am sure I could have downloaded them from the EMMU webpage at less effort!). I went through them Wednesday evening and answered the easy questions (like what is my name). Funny how silly things can irritate me - I'm not a great feminist, but I'm sure that I had to fill in my husband's maiden name more often than the forms asked me for mine! It's hard to get rid of the basic assumption that a minister is a man.
I spent Thursday with a generally uneasy feeling. I couldn't figure out was wrong with me, until it struck me that filling in these forms was making things feel uncomfortably close. There is so much that I am scared of. Being out of control. Having to do things for which I can't really understand the purpose. Submitting. Money and cost of living.
Some of this stuff I know I need to learn. Some I'll only realise I need to know when I know it. And some of it is going to drive me crazy.
But I don't think I have any choice any more. So let it do its worst!
At least as it comes closer I can also see further and as I see the potential for a future beyond probation it is easier to be optimistic. God-willing I will see the other side!
Posted by Jenny Hillebrand at 03:45 2 comments: Links to this post