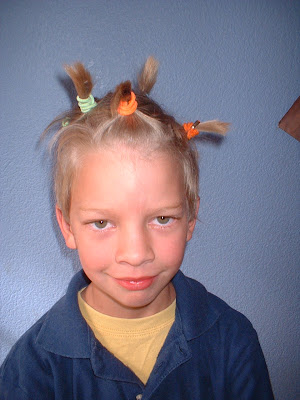 I've tried to promise myself that I would put more work and rework into my blog postings. Because I know that sometimes I am just not communicating what I want to say. But self-discipline is not my strongest point.
My kids almost revel in the fact that they are 'different' to others. Especially my youngest. He was telling me yesterday what made them all different. Ending with, 'as for me, I'm just totally weird'.
I've learnt that the right response isn't 'you're not weird'. He knows he's different and it's part of his identity. Though he probably isn't as weird as he thinks! (This picture of him was for Wacky Hair Day at Cubs - it's not 'normal' for him.)
We have a tv, but we only watch cricket - even though there is no rule about it. We all read pretty widely. We're intense. We're passionately Christian. I've never had to 'force' the kids to go to Sunday School or church. Oh, God has been good to us. Only I'm not sure what sort of a witness we 'different' people are.
I've been rebelling against being different. I want to fit in better. But the last little while I've given in. People are going to think I'm a bit odd. I can't really get away from that. And it takes off a lot of pressure to say, 'I'm me. Take it or leave it'. But there is still the longing to know what it's like to be more like others. To experience genuine community.
But to be honest, as long as I feel part of the 'uncool', I am motivated to care about the other 'uncools' out there. Maybe too much acceptance and safety would make me complacent. But God gives me little pockets of acceptance. It is enough.
Posted by Jenny Hillebrand at 07:03

Thanks David. I think what I need to do is to work on being a useful kind of wacky! There is hope . . .!