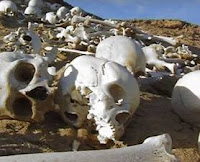 This is a very cool story. Apparently there are historical accounts of a Persian army lost in Northern Africa about 500BC. Archaeologists think that they may have found their bones. 2500 years later! That blows my mind.
This would have been right around the time of the exile of the Jews in Babylon. The Persian king concerned (Cambyses) had both father and son called Cyrus and my history isn't good enough to know which Cyrus ordered the return of the Jews to Jerusalem.
I have some Googling to do! (Story originally found at Boingboing.)
Posted by Jenny Hillebrand at 07:49