The rich get richer

I suspect that the church's message is contributing to the divide between rich and poor. This is why.

This #occupy thing first struck me as a western oddity, but I am beginning to see the sense of it. Graeme Codrington wrote an article, in which he quotes in full another article from Vanity Fair, which throws a fair bit of light on the causes of the #occupy movement in America. The gist of it is that the rich (the 1%) are getting richer and the poor are getting poorer and the divide between them is getting ever larger. South Africa has a similar situation. Graeme says:

What are they protesting against or for, though? Maybe you haven’t been watching very closely.
You should. History is going to judge these events as the beginning of something big. The way the rich have been behaving in many countries is now under unprecedented scrutiny, and will not be allowed to continue. How this will all play out is not yet clear. History tells us that when the rich and poor get too separated, the poor rise up and kill the rich. That’s unlikely to happen (although it can’t be ruled out, even in the most ‘civilised’ of nations), but something will happen.

The following graph was culled out of tax return figures by Roger Saner (via Twitter).(Click to enlarge) 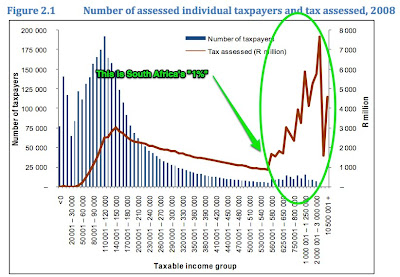 This is South Africa's 1% and it exists as a separated entity.

Now there are three interesting things - the obvious is that 99% of all people are not part of the 1%. This means that the vast majority of the population is feeling a little hard done by when they look at this graph. It's not a matter of my not being happy with just a Blackberry, but rather the wondering why 1% of people have so much and can buy iPads in bulk, while I am so pleased with my Blackberry (in the USA the 1% has 25% of income and they control 40% of wealth).

Another is that white people constitute 10% of the population. Now probably the 1% is predominantly white, but not completely. Whatever, at least 90% of white people fall outside of the 1%. Thus previously advantaged people find themselves part of the considerably less well-off 99% and have a sense of fellowship with the previously-disadvantaged-trying-to-advance people. This has got to have an effect on bargaining power.

The third relates to the message of the church. We commonly tell people - you are rich! Whatever you might think about your circumstances, understand that as long as there are people poorer than you, you are rich. Spread it around guys. This does result in upliftment of the very poor to some extent but also sees a drop in the living standard of the middle class. Thus even the church's message is contributing to the divide between rich and poor. The church should, like the prophets of the Old Testament, be sending a message to the 1%, not castigating the middle class.

Abdul Milazi writes an interesting piece about ubuntu which I think relates (and is funny!) Go read the whole thing!

“The thing is we don’t have ubuntu anymore, our leaders only think of lining their pockets,” stumpy said without missing a beat.

“Ubuntu is for poor people. It’s a survival system where very little is shared among many. When you can afford things, then ubuntu becomes redundant,” I told stumpy and watched the shock on the six faces around me.

“But we need ubuntu for the country to work. We need to look after the poor and spread the wealth,” said stumpy now frothing at the mouth. I handed him a paper towel, but he didn’t get the hint.

Another man whose face escapes me now jumped in: “But this is the exact attitude that has led to tenderpreneurship and all the corruption in the country,” he said.

“I don’t need to borrow a lawnmower from my neighbour because I own one. I don’t need to borrow a cup of sugar either, so I believe my neighbour and I have a constitutional right to be left the hell alone, and the less fortunate have a constitutional right to share everything among themselves to survive,” I said as I left the group with my daughter in tow.
Posted by Jenny Hillebrand at 20:57

Marie Antoinette said, "Let them eat cake." She discovered fairly soon that the line between the rich and the poor is drawn between the head and the shoulders.

And the 99% in America are probably the 1% to the rest of the world.

Yes. And as regards America it becomes a struggle as we all deal with a sense of entitlement - which is counter productive!