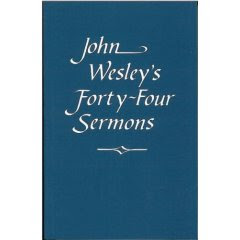 I waited to get through screening to start reading 'A Generous Orthodoxy' which I bought at the beginning of the year. I didn't know who would be on the committee and I didn't want my mind filled with too much non-Methodist stuff! (Now that I'm reading it, I realise that I would have been ok . . .) I also this weekend read through three of John Wesley's sermons as preliminary reading for my Masters. It felt so odd comparing the two writers. I wonder if Brian McLaren had read John Wesley? Methodists don't feature in his book (so far!).
The similarities are, I suppose, obvious. Both men challenge/d the Christian status quo. Both had a passion for the world outside of the established church. It has certainly been said by some people that John Wesley epitomised the emergent church movement. Both claim an allegiance to orthodox theology.
But they write from very different cultures. And I wrestle with the fact that I find John Wesley more inspiring than Brian McLaren. You see, in Wesley's writing I see God and a striving for something higher than ourselves. In McLaren's writing I see McLaren. But I know that in our culture today we are looking for personal stuff.
'Tell me what works for you. Show me your vulnerable side'. McLaren does what is requested.
'Don't lecture me. Don't quote Scripture at me'. Wesley lectures and quotes.
Brian McLaren shows a resentment of his origins, Wesley shows his belief in the future of the church.
I believe that God has used and will use both of them. But I want to figure out why and how it is that Wesley inspires me, although McLaren is more contextually relevant.

Posted by Jenny Hillebrand at 16:41

I haven't read Brian McLaren's book yet (though I'm hoping to soon), but one who is perhaps closer to John Wesley is a conetemporary of his, St Cosmas the Aetolian, the John Wesley of the Balkans. He used similar methods -- open air preaching etc.

Steve Hayes said...
This comment has been removed by the author.
7:02 pm

please keep us informed on your progress; especially those of us who would love to read but find the time lacking...

Thanks Steve. I'm not really looking for people like John Wesley - the similarities (and differences) between him and McLaren just happened to strike me quite forcibly! However, I will look him up as I have never heard of him before.

Thanks Jonathan! As I start reading academically again I'm going to have to make a call as to what is too 'heavy' to blog. But sometimes I need to say stuff and few in my local world really understand!