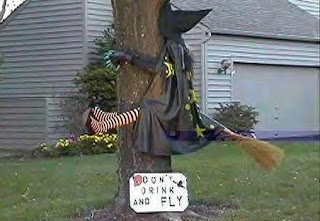 Someone was telling me today about a man whose daughter committed suicide on Monday night. He was estranged from his wife and her family when he became a Christian. They rejected him because they were Wiccan. The daughter was raised Wiccan. I don't like this stuff.
Posted by Jenny Hillebrand at 16:50

witchcraft can be pretty scary stuff especially if they are involved in what is a called covens.

Well thanks for the kind words!

As far as all the pre- and post- stuff is concerned, one of my favourite quotes is:

Sad about the family you mentioned. It's not the first that has had problems with different religions, though. That is all too common. But sometimes the confusion gets too much. My nephew's girlfriend wanted to arrange their baby's baptism long before it was born, sent out invitations and planned frilly bits. But because she never darkened the door of the church, the priest was on leave when the day finally came round and forgot all about it. She was also talking of having a Wiccaning for the poor child, but probably never darkened the door of the coven either.