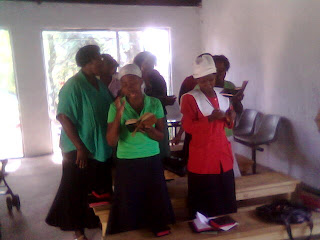 I was preaching at Hlalanathi in an informal settlement again today. We have introduced 'Planned Giving' which is the giving system used in traditionally white Methodist Churches. The people at Hlalanathi wanted some sort of recorded giving scheme, but we were reluctant to use the 'Pledge System' - I don't really know how that works, but I believe it can be abusive. We have given out ten sets of monthly envelopes and have three on the waiting list. We started giving them out last Sunday and even got the first envelope in the collection today. It is important to us to show the people that we take their giving seriously and to be totally open with what happens to the money. The congregation believes that a previous minister used to take their offering and use it to buy airtime for his cell phone!
I also preached a commitment sermon and did an altar call - a bit difficult without a communion rail! Most of the congregation came forward (about ten people) - probably recommitments - and I am hoping that taking a public step like this will motivate them to take their Christian faith even more seriously.
I am taking the service again next week and hope to build on this! God is good!
Posted by Jenny Hillebrand at 17:34

One of the "basic building blocks" of a sound Church, I think, is for the people to feel secure about the finances. We had "slush fund" finances when I arrived here 14-15 years ago, and it was one of the first things I tried to address. Fourteen months later, income was up 50%, although there probably were other factors in that, too.

Yes, as I plan to be a 'real minister', I have to learn what things come first. Unfortunately money is so important while also being 'not spiritual'.