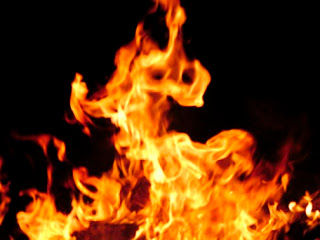 Why doesn't God judge the nations today as he did in Old Testament times? Why does he allow evil to continue under 'illegitimate' leaders?
We've been studying the prophets at Bible Study and the message that comes through is 1. You are doing wrong. 2. God will send punishment. 3. Ultimately there will be restoration, and mercy will triumph over judgement.
My group keeps asking the question - why doesn't God do something today?
Yesterday I thought of a pretty unacceptable answer, but it is making me think. Maybe God is judging the nations. Maybe Robert Mugabe is part of God's judgement on Africa. Maybe the wars in DRC and Darfur and wherever are part of God's judgement on Africa.
But how can God use Robert Mugabe? He is not a good guy (so far as we can see). Well, God used the Assyrians and the Babylonians and they were certainly not Godly nations. How can God allow such suffering under Robert Mugabe? Well, you are asking for JUDGEMENT aren't you?
I'm scared when I think thoughts like this, but there is quite a lot of consistency and it almost makes sense . . . What has Africa done? Well, left God. Shut down mission schools and hospitals. Secularised previously Christian institutions. Labelled missionaries colonial, anti-African activists. But surely God would never be so petty . . . Well, why are you asking for judgement if everything is ok?
Imagine if instead of mourning Africa we said - Guys, we in South Africa need to catch a wake-up. God is warning us. He has allowed North Israel of the Old Testament to fall, but Judah still stands. Can we turn to him and ward off judgement?
But we won't, except maybe in pockets of rather odd Christians. Because God is not cruel and cannot be using Robert Mugabe.
Rev 9:20 'The rest of mankind that were not killed by these plagues still did not repent . . .'

Like I said, it is making me think.
Posted by Jenny Hillebrand at 08:39 5 comments: 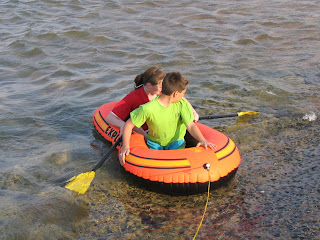 This looks idyllic, until you realise what the weather is actually doing! 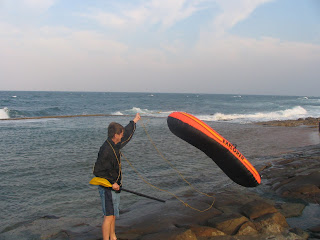 We spent a week at Kelso on the South Coast. It was a good time away with the family, although it was very windy.
Posted by Jenny Hillebrand at 17:23 2 comments: 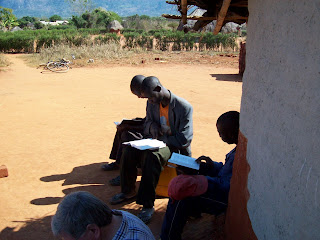 Posted by Jenny Hillebrand at 11:46 3 comments: 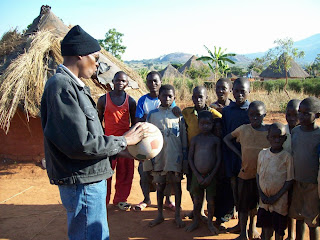 This is our interpreter, Charles, sharing the gospel message with a group of children. We were given these 'Living balls' - they have different colour panels which are used to explain the story of Jesus and salvation. Black for sin, red the blood of Jesus, white for clean hearts, green for continuing to grow. You've probably seen the formula before. I've never used the phrase 'washed in the blood of Jesus' before - but it just seemed to make sense to the people there in this context. How do we make our hearts clean? We wash them in the blood of Jesus.
The idea of the Living Ball is that you engage people in a game of soccer and then when a crowd has gathered you stop and explain the message. Afterwards, the ball is left with the community. Derek and I did most of the gospel-sharing on the first day. Then we encouraged Charles to do it and then members of the community. There was quite a feeling of pressure in that we were only there for a week. We had to get people to take real ownership of their faith and of evangelism as soon as possible.
But it is all in the power that God gives and I hope that they are continuing even now!
Posted by Jenny Hillebrand at 13:54 2 comments:

This is the official report I put in on our part of the Mozambique mission - for those who like stats. The picture is of Lucia's home where our work was based. 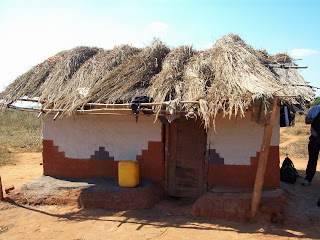 Report on Mission to Belasse Village near Messica in Mozambique July 2008.

This church plant was at the request of Pastor Quenha from Messica/Manica Methodist Church.
Mission team: Derek Weston (Randpark Ridge United Church), Jenny Hillebrand (North Rand Methodist Church), Charles Mondlane - interpreter.
We were told that we would find that a group of people had been meeting at a certain house in Belasse. On arrival on Monday morning there was no one there. That afternoon we found a young widow (Lucia) who had agreed to allow us to work using her home as a base. There did not seem to be any existing worshipping community.
We spent the whole of Monday and the afternoons of Tuesday to Friday visiting homes in the community and offering to share the gospel. It is difficult to know with how many people we shared the gospel. We were generally very well-received. As a result of these visits we had just over 100 names of those who had prayed the sinners' prayer and made a commitment to Jesus - teenagers and adults. These names were given to Pastor Quenha by Charles.
We spent the mornings of Tuesday to Friday training those who came to our base at Lucia's home - nearly all new Christians. By Friday, these numbered about 20 adults and a number of children. By Wednesday the gospel-sharing was being done by members of the community, under the oversight of the mission team.
Amongst those who came to the training was the son of the community leader. The community leader had previously encouraged us to work in the village. We were also visited by the community secretary who received a Bible, but did not join the church.
We delivered 30 Bibles to those who believed and who could either read Portuguese or had a family member who could read it to them. It would seem that no one in the community had previously owned a Bible. The Bibles were treasured by those who received them and there were some who had to go without as there were not enough Bibles. We also gave 10 Bibles to Charles who belongs to the Messica Assemblies of God and whose pastor had requested them.
On Saturday night we showed the Jesus film. There were between 500 and 700 people in attendance. After the film Pastor Quenha spoke a few words and appealed for people to believe in Jesus. About 150 people came forward and prayed the sinners' prayer as a group.
On Sunday we held the first worship service at Lucia's home. This was conducted by Pastor Quenha and was attended by about 70 people of whom over 30 were adults. Pastor Quenha selected leaders from among them. Also about 10 people accepted Jesus and prayed the sinners' prayer after the service.

Posted by Jenny Hillebrand at 15:17 3 comments: 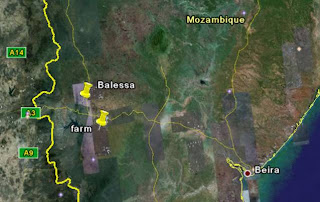 One of the fun things about going to Mozambique was that the doublecab we drove up in had a GPS. The closest I've ever come to one of these is looking at ads in the newspaper!
So - although I was deprived of my new computer (I even dreamt about it one night) - I had somebody else's wonderful techy toy to play with.
GPS in Joburg is often a bit unnecessary, but it was very reassuring to have in Mozambique! We did on two occasions find ourselves on tiny dust roads that it could not identify, but even then it would give us the direction to travel to reach a specified point. And when on the roads, with signposting in short supply, it was encouraging that the GPS would tell us that we were on the EN1 or the EN6 or whatever.
I smsed the GPS co-ords to my husband occasionally, and he tracked us on google earth. I had a look when I got back and it is amazing! The picture here is from Google Earth, with Grant's labelling (and spelling!). You can zoom in much further, on the real thing.
For anyone interested, Belasse is found at 18 56.011 S, 033 12.703 E. The farm where we stayed is near Chimoio at 19 13.614 S, 033 20.522 E. According to Google Earth we travelled about 60km from the farm to Belasse.
Posted by Jenny Hillebrand at 14:02 1 comment: 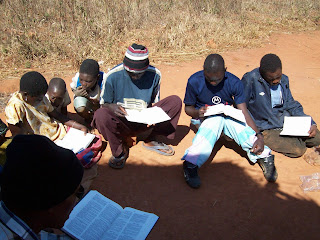 Mozambique was awesome! We didn't make it to Nampula, which was a pity. It took us so long and we had so many vehicle hassles that we gave up near Chimoio. Jonathan Hart, the mission leader from Harvesters International, found us accomodation and replanned the mission pretty much on the spot.

Even with things being difficult because there had been no preparation in that area, we had a brilliant time. My little mini-team consisting of Derek Weston (been preaching for 40 years), Charles Mondlane (interpreter who lives in the area) and myself were so well-received. On paper, we had between 200 and 250 first-time commitments to Jesus, in the Belasse village. I'm sure that not all those will stick. Probably not all were sincere. But I'm sure that in some of the people the faith will take root. We left a little church community of about 30 adults with many children. The trained pastor lives many kilometres away, so we pray that God will strengthen them to keep going as a church and that he will raise up leaders and pastors. Harvesters' International will also follow up and provide training for the leaders.

For me, there were many amazing stories. A guy we prayed for who seemed almost mentally retarded and who pitched up at meetings two days later a completely different person, in full possession of himself and actively participating in training sessions.

There was also much personal growth. I coped away from my family, although I missed them very much. I coped with my need to be by myself for some time every day - I just went away from people when I needed to and didn't feel bad about it. And I'm challenged with church planting and evangelism.

Posted by Jenny Hillebrand at 16:49 No comments: