I'm writing a page or two on the separation of church and state for my Masters. It's cool to bring together the thoughts of Karl Barth, Stanley Hauerwas and John Mbiti. I was wondering what Jesus thought about the separation of church and state when he was around physically.
It is odd, now that I come to think of it, that he didn't talk to the Romans at all. He made no attempt to address the structural oppression that existed. He did not try to create a Christian state. He simply worked with people and their attitudes.
And that is so different from one of the key tenets of Liberation Theology - that one needs to remove oppressive structures before one can have freedom. Jesus was concerned for the poor and the marginalised - so far he agrees without doubt with Liberation Theology. But he seemed to have an amazing lack of concern for the Romans and structural injustice.
I need to think about this some more - can't believe I haven't asked the question before!
Posted by Jenny Hillebrand at 08:24 7 comments:

Why do churches hurt people? John van der Laar has the following very cool quote in a recent post on his blog. (From Carlo Carreto).

How much I must criticize you, my church, and yet how much I love you! You have made me suffer more than anyone and yet I owe more to you than to anyone. I should like to see you destroyed and yet I need your presence. You have given me much scandal and yet you alone have made me understand holiness. Never in this world have I seen anything more compromised, more false, yet never have I touched anything more pure, more generous or more beautiful. Countless times I have felt like slamming the door of my soul in your face - and yet, every night, I have prayed that I might die in your sure arms! No, I cannot be free of you, for I am one with you, even if not completely you. Then too - where would I go? To build another church? But I could not build one without the same defects, for they are my defects. And again, if I were to build another church, it would be my church, not Christ's church. No, I am old enough, I know better.

My thoughts are so mixed with this. Is any relationship idyllic and fairytale-like? If it was, wouldn't we worry? In this last week I've been through the extremes of feeling about my church. Loving it and hating it. When I was sore it was awful. But the fact is that a meaningful relationship has times of pain and times of joy. The deeper the relationship, the more the struggles. I'd love my relationships to be free of pain - but it is not realistic in any setting. Even our relationship with God involves both pain and joy. People (including myself!) have very unfair expectations of the church sometimes.

I know I'm tired, but things like this video just depress me. Most of us in churches are actually just doing our best. I think God loves us anyway!
Posted by Jenny Hillebrand at 08:17 4 comments:

This is Shaw Memorial Church where I will be working next year. Thanks to Kevin Endres, the minister currently there, for the photos! We leave Jhb on 1 January. I need to report for duty on 8 January. Everything sounds very good about where I am going! 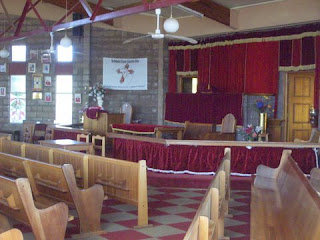 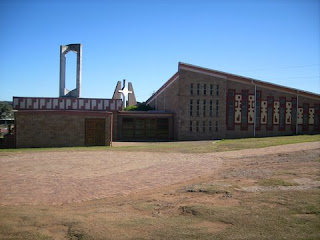 Posted by Jenny Hillebrand at 09:56 4 comments:

This is a cool blog that I found. Dr Bongi is a surgeon in Mpumalanga. Humourous, topical, willing to stick his neck out. The link is to a long post, but worth the read!
Posted by Jenny Hillebrand at 20:42 1 comment:

Email ThisBlogThis!Share to TwitterShare to FacebookShare to Pinterest
Labels: Links

You can tell I'm not a 'real' academic. I've always wondered about these things called theological journals and haven't had the remotest idea what they looked like or how one obtained them. Now for my Master's thesis I require 25% of my bibliography entries to be from journals or periodicals. I also have been looking for a broad range of ideas on what Christian community looks like from a Christian point of view and I really hoped to get ideas across different denominations - which I thought would be really difficult, thinking 'books'.
Now I find that my college library has a reasonable collection of journals, indexed online so I can search at home, and that these journals range from pentecostal to evangelical to missions to youth to whatever. Both problems brought close to resolution!
Only problem is that journals stay in the library and can't be taken out. I have another four weeks before the library closes and thereafter I'm being shipped off to Grahamstown, so every spare moment is being spent in the library. Hopefully this morning is going to see much progress made.
Does anyone know if there is such a thing as a Southern African Methodist theological journal?
Posted by Jenny Hillebrand at 08:41 3 comments:

I received an email from someone concerned at the Methodist Church's involvement in an inter-faith event. There were lots of angles from which I could choose to answer him. One that I didn't use was the question of whether attempting to cooperate with other faiths wasn't simply a waste of time - in terms of getting stuff done (like social upliftment). Working together is a noble goal, but so often we don't get it right even when there are two or three Christian Churches in the same suburb. To think that we can get it right on a larger scale may be optimistic.
But thinking about this and, having just been to a Circuit Quarterly Meeting, I was encouraged by what the Methodist Church does actually get right. For those who do not know, our societies are grouped into circuits, by geographical area. So our Church in northern Randburg forms part of the Fourways Circuit. We don't do much strategic stuff together - churches tend to be too independent. But we pool finances to support people who work for the good of the circuit. The ministers and pastors meet together regularly. The more wealthy societies help support the poorer societies - often paying for probationer (student) ministers to pastor work in them. The circuit is also a point of accountability for ministers and societies and will carry out any disciplinary measures required.
So often we are irritated by politics and long boring meetings and we see circuit stuff as a waste of time. Yet I'm not sure if any other denomination has such an effective structure in place.
It will be interesting to see how the circuit in Grahamstown operates.
Posted by Jenny Hillebrand at 08:14 4 comments:

Good news for Hlalanathi Preaching Place is that although both Vuyelwa and I are moving on next year, someone has been found to care for the new, growing little church community. She will be employed by the Methodist Church part time. She is passionate about mission and is doing her MTh with a mission focus. It turns out that she is also a Methodist Local Preacher, so she will be able to take the Sunday services - although she cannot do Communion services.
Lord - please bless her and bless the fledgling community. Thank you for providing someone to carry on your work there. May she be a real blessing to the people!
Posted by Jenny Hillebrand at 17:18 1 comment:

Email ThisBlogThis!Share to TwitterShare to FacebookShare to Pinterest
Labels: Hlalanathi

Hooray, another chapter submitted for my Masters. A short one this time, but progress is being made. I am so overwhelmed by the fact that I am touching the tip of the iceberg in my reading. There is SO much stuff out there. But I don't need any of my chapters to be definitive - I don't need to read it all. If I have to restart my Masters or if I do a doctorate (distant future!) I think I will try to choose a really narrow topic so that I can research definitively in the space available. There is much more of a sense of achievement and discovery, I think. Although I am learning a lot from my reading now. My chapter now was on John Wesley and community - the obvious contribution he made was class meetings, but I was quite inspired by a lot of what I read. He set pretty high standards for living - but I (in good post-modern fashion) struggle to reconcile the way he lived - and treated his wife - with what he teaches. By no means was he a hypocrite - he gave his life passionately to the cause. Perhaps I am overly critical. Am I demanding perfection and unable to forgive the discrepancies in his character - the like of which we all undoubedly have?
I'd better be careful!
Posted by Jenny Hillebrand at 12:02 1 comment: