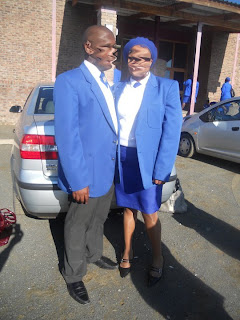 This photo is for all those who find my blog by doing a Google image search for Wesley Guild - especially for the uniform. The photo is from Facebook and I've blurred the faces.
The Wesley Guild uniform is white shirt, royal blue blazer, royal blue Wesley Guild tie with the 'One heart, one way' logo and black shoes. The men wear grey trousers while ladies have a royal blue skirt and beret. The ladies also wear stockings. The rule is no jewellery and no make-up.

While there used to be Wesley Guilds in all Methodist Churches in South Africa, they are usually only found in traditionally black churches now. Sometimes they are considered the youth component of the church, but one may only join the Wesley Guild after confirmation which is usually at about 16 years of age. There is no upper age limit to Wesley Guild membership. Young Methodists will often join the Wesley Guild as their 'first organisation' and then progress to the Young Men's Guild (YMG) or Young Women's Manyano (Izintombi) - although they will retain membership of the Wesley Guild. But this is not a rule - just what generally happens. When a woman marries she will join the Women's Manyano (or Mothers' Prayer and Service Union) and must leave the Young Women.
Posted by Jenny Hillebrand at 18:16