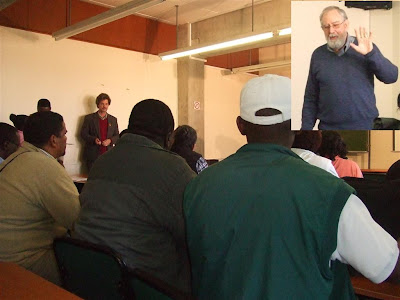 Posted by Jenny Hillebrand at 17:15

John de Gruchy? I think this is what the theologians mean by "omnipresent". How did you catch his hand like that? Was he saying: "We need to PUSH for an alternative theology"? or "I DEFEND myself against suspicions of polytheism"? :-) He was my late wife's supervisor, and has been a mentor to me.

I don't remember what he was saying just then! It was near the beginning - he was talking about writing articles. I thought about you and Mirjam while listening to him. From what he said, I think he must have made a good supervisor - he 'gets' mentorship.

He was an excellent supervisor. Mirjam said he was like a father to her. He conducted her funeral service. Mirjam was his last doctoral student.