The Faith Communities Today Survey 2010 has some interesting data about the change in American faith communities and the church. You can find the survey here. (And thanks to TSK for the lead.) 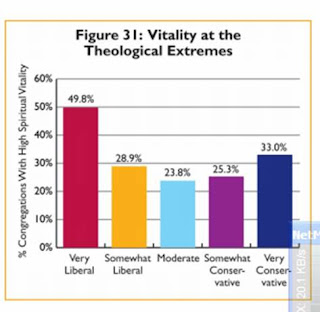 I haven't read, yet, how 'spiritual vitality' is determined - but it's interesting that a higher percentage of congregations in the extreme positions have a higher vitality. This graph does not say that 'very liberals' are more 'spiritual' than others - just that a 49.8% of those who are defined by the survey as liberal have 'spiritual vitality'. Bottom line - most churches have low vitality, but those who think more about their theology have a higher percentage vitality. 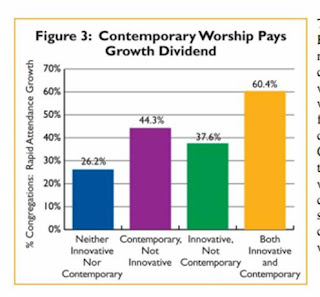 There is a similar graph in the survey showing spiritual vitality rather than attendance growth, which showed that innovation was key. Here contemporary is key. In both, innovative and contemporary is the ideal. 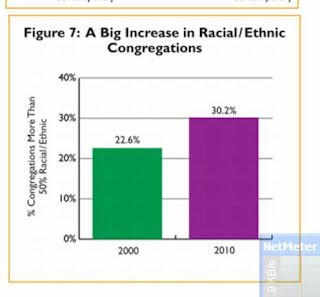 I am interested in the different dynamics around ethnicity and church that we see in America compared to here in South Africa. In America the white population is dropping and increasingly ethnic groups are forming their own congregations rather than attending 'white' services. Many churches encourage this and I know of at least one seminary that is actively producing study material in Spanish to cater for the training of Hispanic pastors. In South Africa, in the Methodist Church, white congregations are generally trying to become multiracial - the desire is to include wherever possible. I think that we could learn a lot from the American dynamics if we were to analyse the similarities and the differences.

Posted by Jenny Hillebrand at 10:34

And Oom Henk Verwoerd will be jumping with glee in his coffin and saying "I told you so, I told you so".

South Africa rejected "own affairs", but the rest of the world is welcomng it with open arms.

I was puzzled by what the difference is between "contemporary" worship and "innovative" worship. It turns out that contemporary is drums and innovative is anything from drums to Catholics reintroducing the Latin Mass!

I'm probably not the best person to comment on this (Orthodox worship hasn't changed substantially for at least a millenium), but it does raise the question of the relationship between worship and truth for me.

I was actually wondering about the Catholic experience, at least in some places, of a younger generation seeking a return to older patterns of worship and whether that didn't call these findings into question. But seeing that this falls under the "innovative" category, it seems that this is seen as one more superficial consumer item, something that could indeed be a danger not only for Catholics but also for Orthodox, and perhaps for some Protestants too. But, while it might be a danger, it is an understanding that needs to be seriously contested, something that someone like the present pope has done quite well. Worship can no more be about the flavour of the month than theology can be about the flavour of the month.

But what is spiritual vitality?

With regard to monocultural Church, this is the so-called homogeneous principle, promoted among others by my alma mater, in particular Donald McGavran.

They asked us to do an assignment on any given Church, detailing how they excluded people (which was frowned upon). I needed to look no further than the seminary chapel ... !

Hi Macrina
My feeling is that there is a fine line between consumerism in church and contextualisation. Do we give in to the crowd (make it lord) when we change worship styles or do we enable the crowd to worship? I am quite flexible in that I appreciate many styles, but there are some ways in which I cannot worship that seem to suit others perfectly. I don't think there is one right way to worship.

Hi Thomas
Yes, that is not sufficiently clear and almost certainly puts bias on the survey.
Monoculture/ homogeneity South Africa has so much potential to lead the world . . . maybe we will yet!

Thanks for comments all!