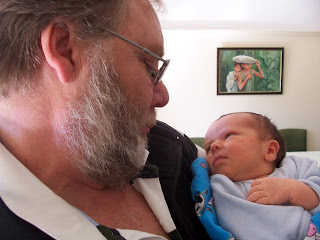 I don't know how many times I have searched my collection for a picture of Ross that does him justice. Today this one works for me. He is with one of the seminarians' newborn baby.
And so he passed away yesterday. It sinks in slowly. So many pictures of him, cameo incidents in my life as a seminarian. So many that I am still replaying as I apply them to ministry.
Ross once said to me that I was the third most difficult person to know that he had ever met. I laughed (inside, because he was frustrated with me), because to me he was the most difficult person to know that I had ever met. I think that we were both used to other people opening up to us and not really having to say that much about ourselves until we chose to.
The last three months that I was at seminary we struggled through those barriers and I was enormously grateful for the gift that he gave me of allowing me to really know him. I can never describe all the pictures, but I'm glad that our paths crossed.
Ross, thank you.

Jon-Mark's Tribute at the memorial service.

Posted by Jenny Hillebrand at 10:46

Jenny, you put it well. For some of us, for some reason, he was difficult to know. At the same time, my life has been enriched indelibly.

May his memory be eternal!