Three brief thoughts on our IST in Port Elizabeth.

We went to see a factory and watched work on their assembly line. I enjoyed this very much. It was part of our focus on socio-economic issues and I found it helpful to see factory workers in action and I have a better idea of the difficulties that they might face.
While I understand the need for probationers to get together and I value much of what we did, I find it very tiring and have come back to circuit depleted. I might just be too old for this!
The difference between the conditions in the townships in the Western Cape and the Eastern Cape is marked. There we found roads with potholes, piles and piles of rubbish lying around and tap water limited to a trickle because of damaged pipes. I can't say that there is no litter on this side - there is and the wind makes it difficult to keep our church grounds tidy - but there are not piles of dumped black bags which just accumulate. Stuff is regularly tidied up.

And now, I'm happy to be back at home, although next week sees all the ministers off again for the district retreat.
Posted by Jenny Hillebrand at 07:46 No comments:

Setting the church on fire 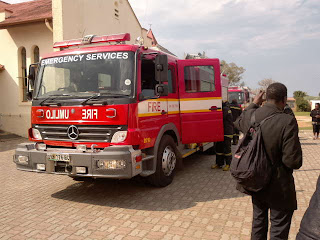 The fire brigade had to be called when a fire started in the church during our IST. Maybe it's a sign of what this group of probationers is going to do . . .
(It was an electrical fire in the lights and did not spread.)

Posted by Jenny Hillebrand at 17:41 2 comments:

We arrived in Port Elizabeth yesterday for our probationers' in service training. There is an agreement between the Cape of Good Hope District and the Grahamstown District that we do our IST's together. Last time they came to Cape Town, this time we have travelled to them in Port Elizabeth.
The best thing, as always, is hearing other people's war stories. It is so reassuring to hear that other people also have tough times, but also discouraging to realise that conflict and power struggles seem to be the norm in churches. It is also really good to have a chance to share with ministers who have been doing this for a bit longer and to be able to ask questions and get advice.
The actual programme for these few days is not actually that important!
Posted by Jenny Hillebrand at 17:31 No comments:

I didn't make a conscious decision to stop writing over the last little while. It just seemed as if I needed to stop. Reevaluate. Find out if I had anything to say. It has been a good time of working things through. Finding myself, as it were.
One of the things that I realise I have done is to abandon some of my role models. Well, not to abandon them at all, but to be more careful about how they influence me. I have found that when people give me advice or teach me in a structured environment I evaluate what they say, accept some, reject some and keep some to think about. I have been far less discriminating in accepting behaviour and values modeled to me. Not that it has been bad, but mostly other people are not me and I am not other people. People like Pete Grassow, Ross Olivier, Costa Stathakis, John Bailie have had an impact on me, not because of what they have said, but because of the core values that I have seen behind their ministries. And I have just had to accept that although I admire these things and still aspire to them, I will not be able to achieve them in the way these people have. I know that this is a  really basic concept and I should have been more alert to it, but I wasn't.
So, amongst other things, Pete modeled balance in life to me. But his way seems almost clinical and I know that I am not in a place to do that now. And it's ok. Amongst other things, Ross modeled a passion for social justice and a need to be involved in everything. I can't do that or be that right now. And it's ok. Costa, amongst other things, passion, drive and vision. My churches can't take that yet. Not now. It's ok. John - many, many things that I have learnt and will still learn, but one that I can't do like him is his concept of hard work. I value it. I hope I do work hard, but it doesn't look like his looks. And it's ok.
I have found that it's one thing to read something like I have just written and quite another to actually identify this and work through it. I feel disloyal to people I value. But I would imagine, and hope, that they don't see it this way!
Posted by Jenny Hillebrand at 20:51 No comments:

I hope to have a photo of something from church or otherwise for the blog today. But apart from managing to charge the battery on my camera, I forgot all about it!
The family and I have been bitten by the geocaching bug and we spend most Sunday afternoons exploring a new bit of Cape Town and looking for geocaches. I find it an excellent way to unwind after Sunday services. Today we walked down the main road Muizenberg following clues, found the cache and finished with ice creams.
Life could be worse.
Tomorrow all the Western Cape probationers head for PE in a 14 seater bus  for a week of in service training. Not my favourite, but the sooner it begins the sooner it is finished!
Posted by Jenny Hillebrand at 16:53 No comments:

On Thursday morning I was sitting in the library at Stellenbosch University. The aircon was on and the sun was shining outside. I was warm and comfortable. It was the first time that I had spent some hours at a desk in the library working. And the first time that I have even been to the library for about four months.
I looked down at the shelves of books on the floor below me, I breathed the bookish air and I thought the time might just be right to start blogging again.
Posted by Jenny Hillebrand at 08:38 4 comments: